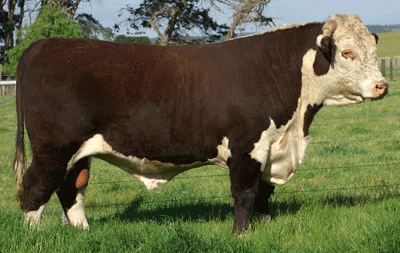 We purchased Valiant at the 2008 Southern Cross Sale for the top price of $22,000. Valiant is a big, soft, easy doing sire with impressive daily gain, sound structure and balance. His 200D & MCwt are in the top 1% of the breed, top 5% for 400, 600 & IMF. His 32 sons, sold to date, have topped at $24,000 to record an average of $7,250. Three of his sons, including top seller Mawarra Youngster, were all class winners. Whistler was Reserve Junior Champion in 2011 and Youngster was Reserve Intermediate Champion in 2012. Valiant’s daughters are proving to be good cows with plenty of milk, softness and rich Hereford coat and cosmetics. With 21 currently retained in herd, they are productive females who are working very well when crossed with Mawarra After Shock. We have retained a Valiant son, Air Marshall, Supreme Hereford Exhibit and Champion Interbreed Senior Bull at the 2013 Royal Melbourne Show (Hereford Feature). His first sons will be offered in 2017.