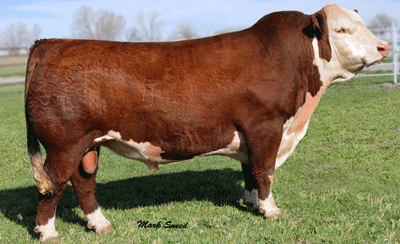 Ranked the No.2 sire in the breed by the American Hereford Association Fall 2014, they described Victor 719T as follows: He is a unique combination sire with exceptional calving ease, performance and phenotype. His daughters are productive, feminine and have great udders. He ranks well for relevant traits of beef production – calving ease, early rapid growth, maternal traits and muscle.

719T’s first sons at Mawarra were offered in 2016. Two were exhibited as part of our Hereford National (Wodonga) team, $8,000 Norhtern Chill and $5,000 Night Rider. His six sons sold to $8,000 twice across our two sales events for the year. Five young daughters are retained in herd.