International and interstate visitors joined a strong Gippsland contingent at the Sykes family’s Longford property on Monday, March 27, for their 44 th Annual Sale. Mawarra’s reputation for industry-leading genetics saw strong competition from both stud and commercial producers, with the previously recorded on property top-price of $22,000 being equalled, and then beaten, twice. At the conclusion of the sale 73 bulls had sold, from the 92 offered, to record an average of $8220, which was $1000 above the 2016 result. Bulls were sold into Tasmania, New South Wales and South Australia. East Gippsland was also strongly represented amongst the successful purchasers. 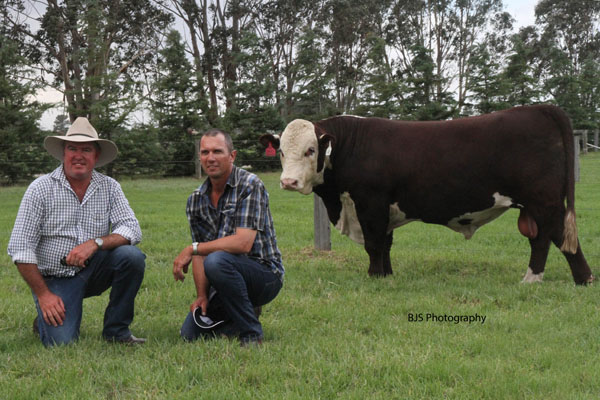 The top price of the day, $36,000, was paid for Lot 46, Mawarra Ohio L416 (AI) (ET) (P), by Mark Wilson of Kerlson Pines Poll Herefords and Andrew Schwartz of Oak Downs Poll Herefords, both from South Australia. They travelled to Mawarra for an inspection after being impressed by what they saw of the young August 2015 drop sire on the pre-sale video. The 844kg Allendale Anzac E114 son, out of Mawarra Minerva 774 (Dam of Mawarra’s retained sires, After Shock and Class Act), combined phenotype and elite pedigree, with growth and carcase EBVs amongst the top 1-10% of the breed. Mawarra’s draft of Anzac E114 sons continued to sell with the popularity they have enjoyed throughout the country, with sixteen averaging $8,750.

Karoonda Herefords, Gelantipy, paid the second-top price of the day ($29,000) for a Devon Court Advance F052 son, Lot 6, Exceptional (H). This sire line proved to be highly sought after, with Keith Davies, also of Gelantipy, paying $22,000 for Lot 5, Evident, who was used as a joining sire at Mawarra prior to their Ladies Day sale in November last year. Newcomen Herefords, Ensay, secured another son, Lot 12, Embark (H), for $21,000, while Devon Court Principal, Tom Nixon, made the long trip south from Drillham in Queensland to see Advance F052’s nine sons average $11,550.

Peter and Deanne Sykes were pleased to see so many people take the time to travel to Longford. “The confidence shown in our program today was truly gratifying. We appreciate everyone who came through the gate today, or chose to view and participate in the sale, online. There has been a healthy mix of new and return clients, with stud and commercial producers competing strongly for their selections and a total of 15% of the purchasers will be including Mawarra Genetics in their programs for the first time. We are confident that the sires offered today have a role to play in the industry and we look forward to following their progress well into the future.”