Jody and I have a Hereford Stud in the upper part of the North Island of New Zealand. We have only been breeding Hereford cattle for 7-8 years. We have focused over the last few years on improving our female base and endeavouring to produce a Hereford which captures our vision of this wonderful breed of cattle – temperament, conformation, carcase quality, growth and eye appeal. 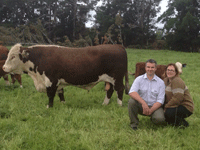 It was with great excitement I visited Mawarra for the first time at their bull sale in 2010, and realised that this world-class stud had everything we were looking for! Since then I have visited four times, purchased embryos, semen and last year the top priced Lot at their 40th annual on-farm bull sale.

The Mawarra genetics we have used are making a significant positive impact on our herd; it is delivering everything we had hoped for. And on top of our best young animals being the genetics purchased from the Mawarra Hereford Stud, we have really enjoyed both the business transactions and friendships created with the extended Sykes family; nothing has been too much trouble (and sometimes exporting does create trouble).