Skip to content
Mawarra If “If Only” turns into a $103,000 dream come true at the Wodonga National Sale (Herefords Australia)

Mawarra If Only Q264 smashed the Herefords Australia Wodonga National Sale record on Wednesday, selling for $103,000 to David Lyons of Melville Park Herefords in what Mawarra stud principal Peter Sykes described as a “dream come true.”

According to show and sale coordinator Jamie-Lee Oldfield the bulls on offer were of high quality although numbers were lower than previous years.

“It was an outstanding line-up of bulls, we’re slightly down on numbers this year but really excellent quality and it’s a big credit to the vendors to have achieved such an incredible result,” Ms Oldfield said.

$103,000 If Only was the star of the show in what was an incredible day for the Hereford breed.

The 21-month-old horned sire weighed in at 872 kilograms with an EMA measurement of 133 square centimetres, rib and rump fats of 14 and 23 millimetres respectively, and a scrotal circumference of 42 centimetres.

Purchaser David Lyons had been looking into Mawarra If Only prior to the Wodonga National and was drawn to the bull’s combination of phenotype and impressive data set, saying it can be hard to find a good bull with good figures to match.

Peter Sykes agreed that If Only was an impressive young sire, offering an excellent combination of phenotype and genotype.

“We think he’s a very special bull, he’s got great phenotype, he’s structurally perfect, great temperament and the best thing with him is he was the highest IMF bull of all the 2018 horn drop bulls, and he’s got great figures with it so it’s great to have a bull with both,” Mr Sykes said.

According to Mr Lyons If Only Q264 will be transported from Wodonga to Total Livestock at Camperdown for collection before he returns to the Melville and Melville Park studs at Vasey for winter joining in 2022.

Sired by Mawarra Emperor and out of a Devon Court Advance F052 female, Mawarra If Only bears close pedigree similarities to Talbalba Emperor P043 who sold for $100,000 to Yarram Park and Cara Park studs at the Talbalba on property sale in 2020.

The second top price of the sale was paid for Mawarra Terminator Q274, a 22-month-old sire which sold for $53,000 to a syndicate comprising of South Australian studs Morganvale and Oak Downs, as well as Stoneburn from New Zealand.

Terminator is by US sire NJW 79Z Z311 Endure 173D and weighed 966 kilograms with an EMA measurement of 137 square centimetres.

The third top price of the day also came from the Mawarra team with Mawarra Influential Q162 selling for $42,000 to an international partnership between Graham Herefords of Cootamundra and Haven and Pulham Herefords in the UK. 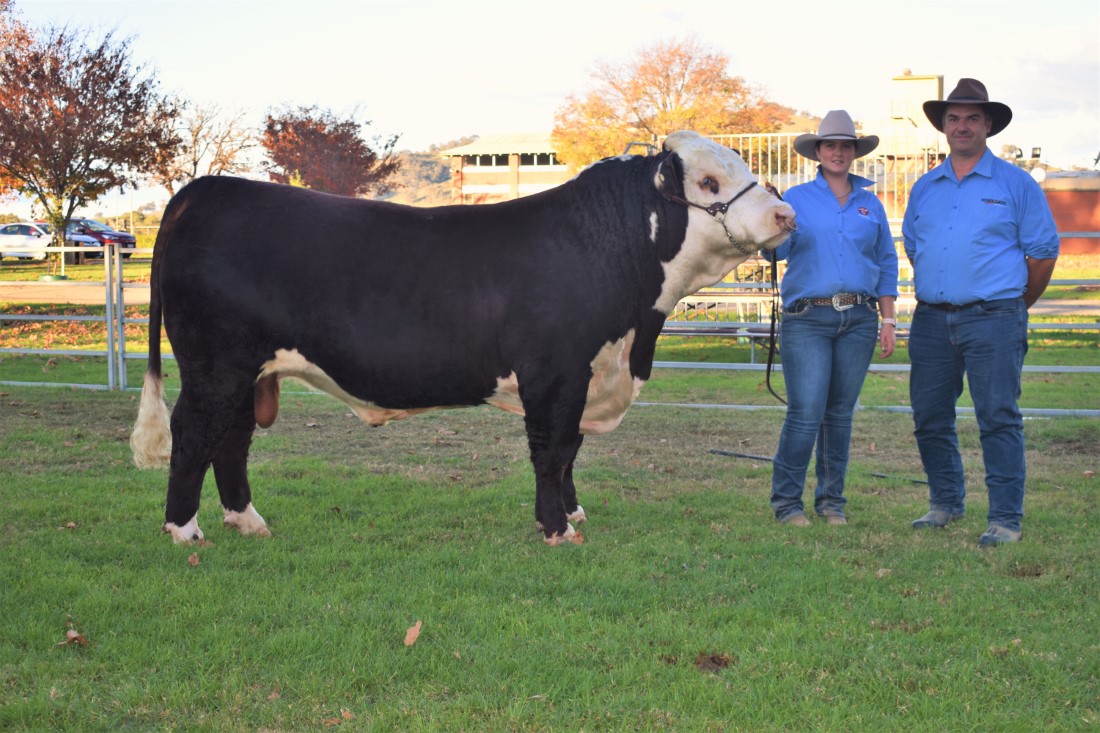 According to Jason Graham of Graham Herefords he purchased Influential’s sire Mawarra Evolution four years ago and the UK studs also had previous experience with Mawarra genetics.

“Haven and Pulham are a couple of very well known and established Hereford studs in the UK and they were keen to get the EU and UK semen rights and we were really keen to have the bull at home,” Mr Graham said.

Haven Herefords are the oldest family run Hereford herd in the world and were established in Herefordshire in 1822.

Peter and Deanne Sykes of Mawarra were delighted and humbled with their results on sale day, with the seven Mawarra bulls offered selling for an average of $41,428 and a gross of $290,000.

“We’re just blown away by that [result], to think that people have that much support for the genetics that we’re producing is just incredibly humbling and we are very grateful for that.

“I’m just so proud of the family, it’s such a team effort for us and its just brilliant to be here all together and sharing in it and that’s what makes it really special,” Mrs Sykes said.

Glendan Park stud principal Alvio Trovatello was very pleased with the sale result and described Quality as the type on bull Glendan Park aim to produce.

“We kept a bit of semen for in herd use, he’s just the type we’re trying to breed, maternally strong and good muscling, we’re really pleased with him,” Mr Trovatello Said.

Yarram Park are repeat buyers of Glendan Park genetics and had shown an interest in Quality following the Glendan Park on property sale earlier in the year.

“It’s a bit of a time-honoured event, the buyers always come back to Wodonga, that’s where they like to buy their bulls, they enjoy the outing, they enjoy the spectacle and I think that’s part of the whole event.

According to Mr Milne the sale was backed by very strong commercial support with strong stud enquiry and the sale result shows great confidence in the Hereford breed.

“Buyers are reinvesting after the great result they got back in the summer, a lot of those weaner sales through January, February and March, they’re finally starting to get rewards for their cattle so it’s good,” Mr Milne said.

Peter Sykes agreed that it is an exciting time for the Hereford breed with the ongoing strength and confidence in the commercial cattle market.

“It’s a fantastic thing for Herefords to see that they sell, and the commercial producers are really chasing them now.

“With the grass-fed programs we’ve got at the moment the Herefords are standing well up in them and it’s great to see the support at these bull sales,” Mr Sykes said.