“Having visited Mawarra Herefords in Victoria in early 2009, we had the pleasure of inspecting the cow herd and were very impressed with the size, quality and doing ability of the cattle. We were then fortunate enough to purchase an exceptional bull called Mawarra Unrivalled at Wodonga who weighed 1188kg at 27 months. We now eagerly await his calves.” 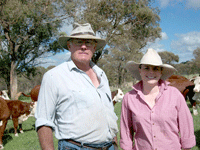