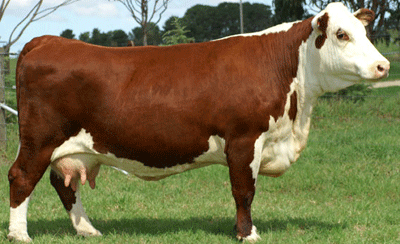 “Can you afford NOT to have Minerva son in your Sire battery?”

A prolific breeder of performance cattle, her ten sons, sold to date, have averaged $17,100. Her dam, both grand dams, sister, Minerva 555, & daughter, Minerva 842 are featured in this section.

Minerva 554 is dam of the internationally recognised Sire Vice Admiral. His semen has been sold Australia wide and exported to New Zealand, the UK, Ireland & Canada. Embryos were recently sent to Uruguay. She has had two sons claim Hereford National Grand Champion status; $48,000 , M. Trail Blazer, 2008 & his full brother, Unique, $32,000 in 2009. Another full brother, Vice Regal sold at the Hereford National in 2010 for $21,000. The fourth brother, Vice Chancellor, was retained as a sire at Mawarra. Whisky River, full brother to Vice Admiral, is also in our Sire battery. Minerva 554 was represented by another Vice Admiral full brother, Winchester at the 2011 Hereford National. He was awarded Junior Champion & sold to Tondara Herefords for $26,000. Another Vice Admiral brother, M. Young Gun sold for $15,000 at our 2012 Sale. Minerva 554 is our leading Donor Dam & has fifteen young daughters currently in herd.