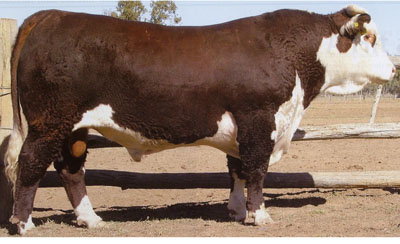 Magnum has proven that he is one of an elite group of sires that can best be described as a breed improver. He is a Trait Leader for EMA & RBY. We purchased him in partnership with Glendan Park for $42,000.

His progeny have exceeded even our high expectations. One of his first sons at Mawarra, Vice Admiral, epitomizes what we thought this powerful sire could achieve for us, see notes above.

Magnum sired the Grand Champions at the Hereford National in 2010, Mawarra Virginian and 2011, Mawarra Westlife and the Reserve Grand Champions in 2011, Mawarra West Coast and in 2012, Mawarra Yesteryear. A grandson took out the top honour in 2013. We have exhibited twelve of his sons at the Hereford National; seven of them have brought home eleven broad ribbons. 68 Magnum sons, sold at Mawarra, have topped at $40,000 amassing a gross of $567,000 to record an average of $9,200. His daughters are equally impressive and they continue to make a valuable contribution to our breeding program, we have thirty continuing his legacy in herd.