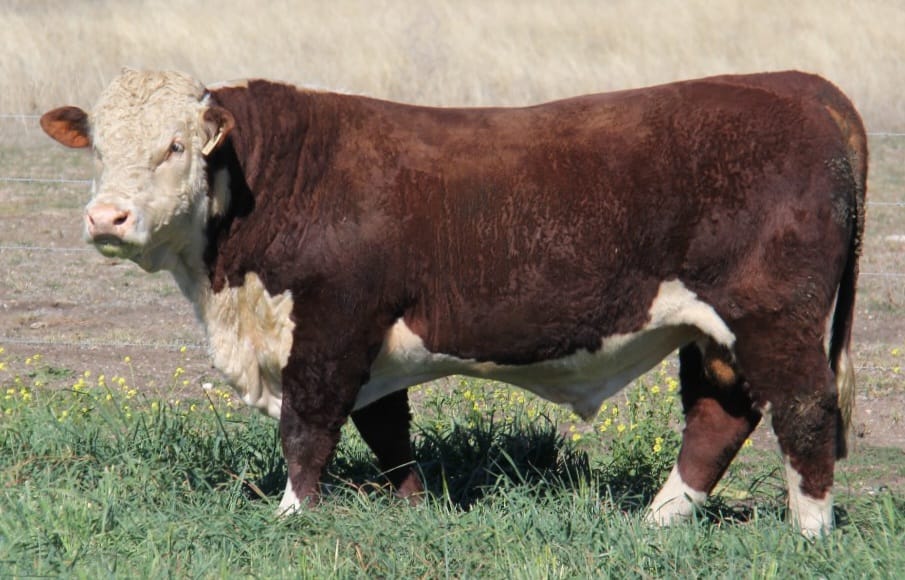 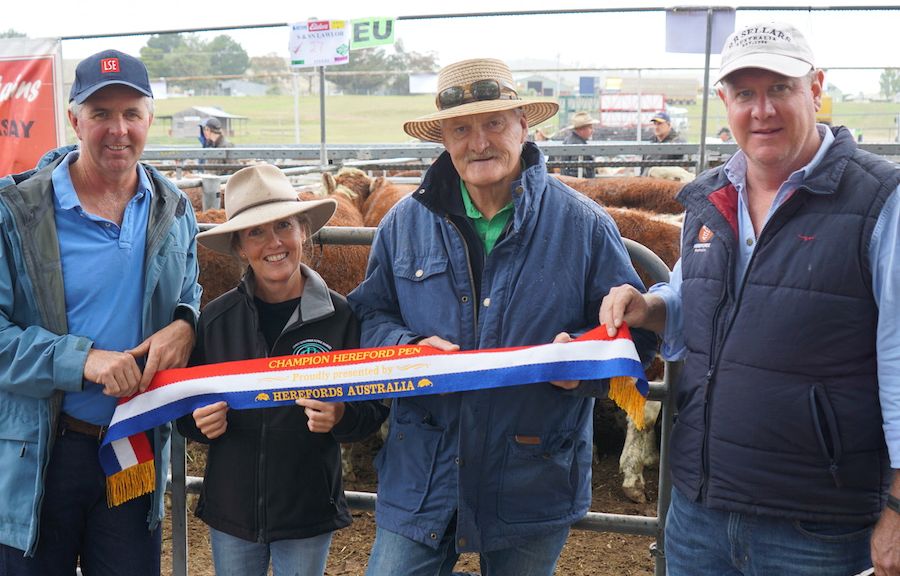 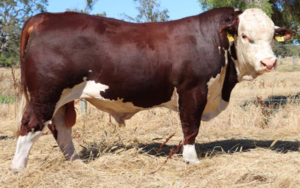 Congratulations to Kanimbla Poll Herefords on a highly successful 2018 Sydney Royal Hereford Feature Show. Their team included a Mawarra Manitoba daughter, Kanimbla Tia Maria N005.  She was awarded Calf Champion and sold for the sale top of $12,000. Kanimbla’s team of only six cattle took home the Most Successful Exhibitor award, an impressive effort and testament to the quality of their cattle. 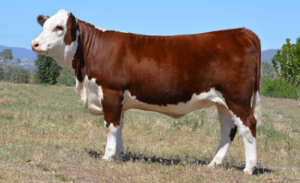 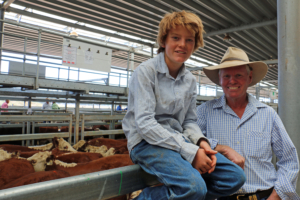 Congratulations to Jeanette and David McCormack, and family on winning the Herefords Australia Champion Pen at Wodonga, January 11, 2019. 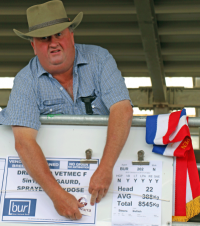 The McCormack family were proud winners of the Herefords Australia Champion Pen at the Wodonga Blue Ribbon Sale on Friday 13th, 2017

The 26 Mawarra blood, 10 month old steers weighed 370kg and sold for $1400 or 378c/kg. Mr Davies described the steers as having weight for age, length, depth and shape. Read the full sale report…. 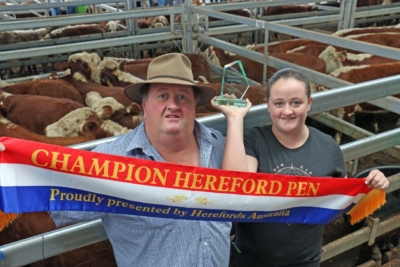 Mawarra genetics were represented at the feature weaner sale in Hamilton, January 11, 2017 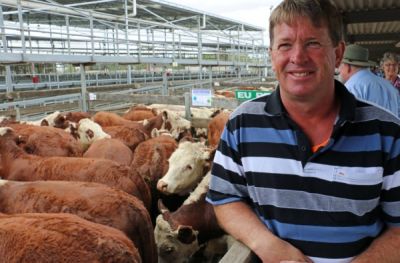 Mawarra Sires will put your calves at the top end!

Demand was red hot in Bairnsdale on August 26, 2015 Trent Anderson, St Katherines, Darriman, sold the top pen of Herefords on a cents per kilogram basis, weighing an average of 322kg, the Mawarra blood steers returned 431c/kg or $1390.  Read the full report 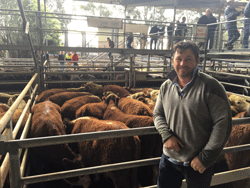 Bairnsdale September 4, 2015 – Mawarra genetics influenced a significant proportion of the yarding across the Hereford, Poll Hereford and Black Baldy’s on offer in Bairnsdale today with approximately 400 head boasting the genetic merit of the Stud’s bloodlines. Prices topped, dollars per head, at $1,440 for a pen of Mawarra’s own steers. Continue reading the full report from Herefords Australia here.

Vendors enjoyed record returns at the Anniversary Mountain Sales and our clients were rewarded for their excellent calves. Pictured at Omeo are the first run of steers and heifer calves, many Mawarra influenced throughout the draft.  Continue reading the full report from Herefords Australia here. 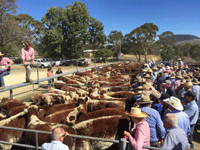 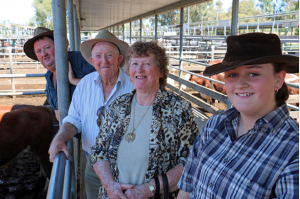 pictured here with Peter Sykes, Mawarra Herefords, was pleased to sell a run of 77 heifers, weighing 268-300kg, Mawarra blood, to a top of $710 or 236c/kg. “I sold 52 Hereford steers, averaging 690kg, on Tuesday at Wodonga for an average price of $1525,’’ Mr Trethowan said. “The market has been good for about three weeks – I was hoping the heifers would make 200c/kg today. “I’m 88 and I’ve never seen the market like this before.’’ Arthur also recorded the top c/kg price of 236c/kg for his 50, 300kg, Hereford heifers. Arthur has been purchasing bulls exclusively from Mawarra for the past fifteen years.  Report detail and photo courtesy of Kim Woods, Outcross Media 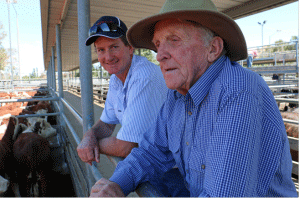 Tony Reardon and sons Ben & Tom, Brooklyn Pastoral Co, Mansfield sold a pen of 39, 373kg 8-10mth old steers, for the equal top Hereford weaner price of $965 or 258c/kg at Wodonga January 15. Mr Reardon averaged almost $900 for the 82 weaner steers he offered, up from a top price of $685 in 2014. Mawarra bloodlines contributed significantly to the Brooklyn Pastoral draft, Mr Reardon has been sourcing bulls from Mawarra since the 1990’s. (Story and photograph courtesy of Kim Woods, Outcross Media) 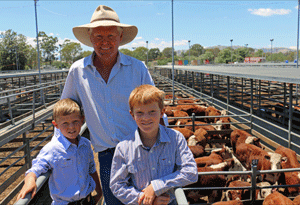 Brian Mahoney, Mansfield sold black baldy steers to $960 or 256c/kg and Herefords to 250c/kg at Wodonga on January 15. “It’s an excellent sale and my steers were over $300 up on last year,” Mr Mahoney said. “I sold seven-year-old Hereford cows yesterday up to $1500. I like the Herefords for their doing ability and temperament.” 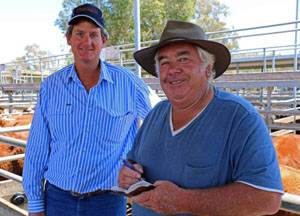 Consistent performance where it counts….. Craig & Ken Hutton of Bairnsdale were happy with a top pen of $880 for a pen of 415kg 13-month-old Mawarra-bloodline Hereford steers…… There were many vendors with cattle bred from the Mawarra bloodline. Quote courtesy of Stock and Land  The Hutton family sold heifers to a top of $570. 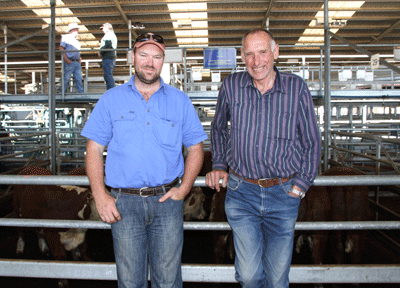 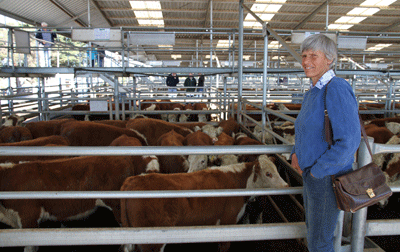 St Katherines, Darriman, sold 42 Hereford steers at the Heyfield sale to a top of $860 and average of $800.

Neil Schmidt, Rutherglen Breeding quality cattle gets good results, but having a repeat buyer bidding also helps. Neil Schmidt, Rutherglen (right), again purchased the steers offered by Jeanette and Frank McCormack, Tallangatta, (pictured centre with son David, left), at the Wodonga all breeds on January 3. Mr Schmidt said their steers were mainly by Mawarra bulls, which are known for their length and growth. He said his recent consignment of bullocks purchased from Frank and Jeanette weighed up to 800 kilograms live weight. Mr Schmidt also said their ability to grow out to these weights was why he kept buying them. The 21 steers, which weighed 351kgs, sold for $685. /2014/ 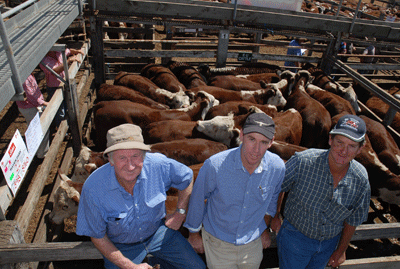 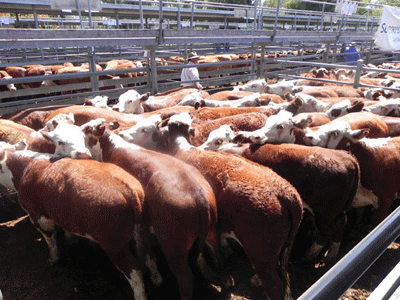 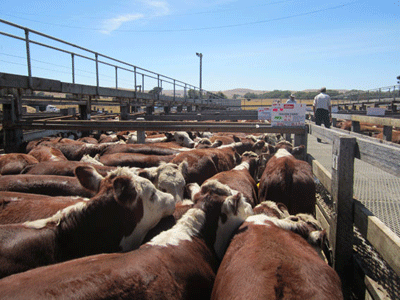