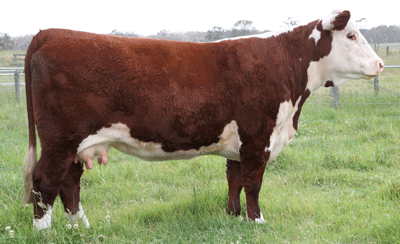 Peter considers Minerva 842 to be one of the best heifers we have bred.

Her impeccable pedigree boasts Magnum, sire of the Hereford National Grand Champions 2010 & 2011 and Minerva 554, dam of the 2008 & 2009 Hereford National Grand Champions. Her full brother, Vice Admiral, is breeding exceptionally well both in Australia and internationally. Other full brothers include M. Whisky River, M. Winchester & M. Young Gun. The genetic potential of this female is immense. To this end, she was the youngest Donor Dam to enter our ET program. Her embryos have been exported to New Zealand and Uruguay. One of her calves, in Uruguay, was in a winning pen at the International Pen Show held in April 2016 at the World Hereford Conference. Minerva 842’s five sons have averaged $6,400. Her top selling son, $17,000 Cowboy Deluxe, sold to Newcomen Herefords at the Hereford National (Wodonga) 2015. Minerva 842 has nine daughters in herd.