A Victorian family of prominent Hereford breeders have been crowned the most successful exhibitors at this year’s Herefords Australia National Show in Wodonga.
The Sykes family of Mawarra Genetics, Longford, and Mawarra B, Koetong, won three of the four major breed awards during the 57 th annual show in north-east
Victoria on Wednesday. Mawarra Genetics stud principals Peter and Deanne Sykes won the intermediate champion bull, which was also crowned grand champion of the show, while their son and daughter-in-law, Brandon and Brittany Sykes, Mawarra B, won the junior champion bull title. 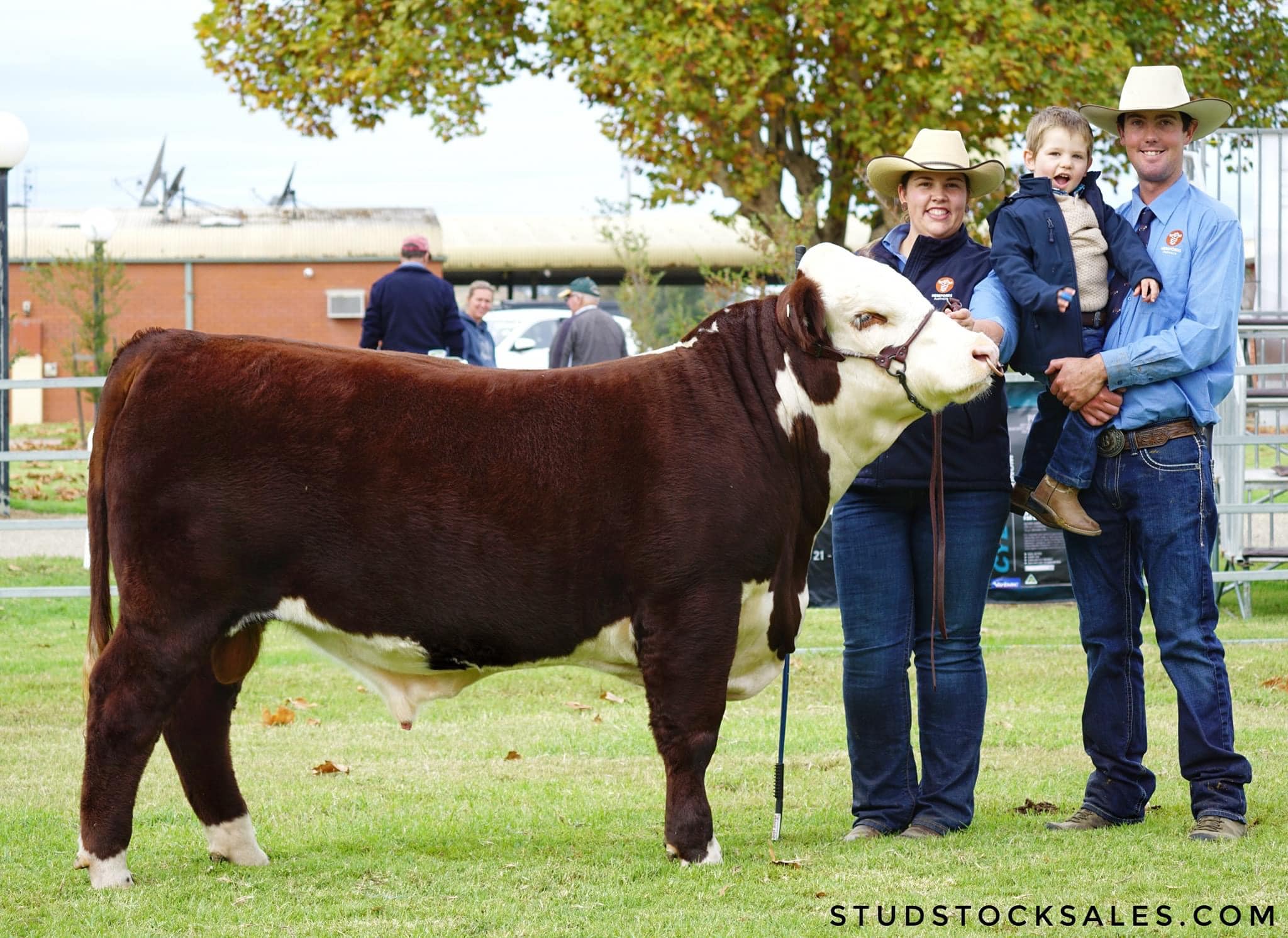 Ruffy-based stud, Tarcombe Herefords, claimed senior bull champion with an April 2020-drop bull out of a first-calving heifer.
Mawarra Genetics stud principal Peter Sykes said it was a great result for the Mawarra brand & Our aim is to breed consistent cattle from top to bottom along with the carcase traits the industry is looking for, Peter said.
“It’s great to go out against other vendors cattle and see how our cattle compare and it helps benchmark our bulls to see if we are heading in the right direction.”
The Sykes family have won the most successful title more than a dozen times at Wodonga, including seven years in a row, as well as last year at the 2021 event.

Bulls being prepped for the 57th Herefords Australia National Show in Wodonga today. More than 30 studs from across Australia vying for the supreme championship title.

Herefords Australia judge Steve Reid, Talbalba Herefords, Millmerran, who assessed every lot in the sale, said he judged the bulls on several criteria.

“I’ve kept away from a few high birth weight bulls and I’ve steered away from bulls that showed poor carcase data or poor calving ease data”v he said.
“I was not looking for top five per cent cattle on [Estimated Breeding Values] to be honest, I was looking for phenotype as much as anything.”

Mr Reid said the grand champion bull, Lot 91 Mawarra Ultra Star, R182, was not a perfect bull, but had a wonderful balance of phenotype and data.
“He has a wonderful EMA, wonderful IMF, tremendous 600-day weight and 400-day weight along with moderate birth weight and positive calving ease,” he said.
“He is a bull with tremendous length of body, a lot of butt shape and really strong through his top.” Then he has those things we really look for in our stud sires; he’s got really strong eyes on him and he’s got good skin”

Tarcombe Herefords principal Tim Hayes, who won the senior champion bull with Tarcombe Cadbury R056, said he was “over the moon” by the result.
“He’s s a heifer’s first calf,” Mr Hayes, who has won a string of champion ribbons in the past, said.
“We like his fitness and his calving traits and that’s what we try to breed”
Tarcombe Cadbury weighed in at 914 kilograms, had an Eye Muscle Area of 133, a P8 of 17, a rib score of nine and a scrotal circumference of 42.

Meanwhile, it was a bittersweet moment for the reserve champion bull, Mawarra Jupiter R044, who was awarded the Clinton Baulch Memorial Award by Herefords
Australia.
Mr Baulch died suddenly in March and Herefords Australia deputy chairman Marc Greening said the award was recognition of his legacy and the work Mr Baulch did to promote the breed.

Couple claim their first blue ribbon at Wodonga show North-east Victorian Hereford breeders Brandon and Brittany Sykes claimed their first blue ribbon at the show in what was an emotional experience for the pair.
Holding back tears, Ms Sykes said she was overwhelmed after winning the junior champion bull category with Lot 3, Mawarra B Show Stopper S001, a yearling bull
which weighed in at 540kg.
The stud principals of Mawarra B, Koetong, said their roll of the dice to bring a young bull into the sale paid off.
“It’s always a gamble bringing in a yearling bull to a competition like this” Ms Sykes said.
“He always stood out as a baby calf and we thought ‘what do we have to lose, so we’re really proud of how he’s developed”
Mr Sykes said months of preparation had gone in to prepare Show Stopper for the sale.
“Brittany and I started the stud 10 years ago and our family has always been into breeding Herefords” Mr Sykes said.
“This is our first blue ribbon and to take out the junior division is incredible.”

Herefords Australia judge Steve Reid, Talbalba Herefords, Millmerran, described the junior champion as an all-round performer.
“I picked out the baby bull because I thought he had the best combination of muscle and structure”  he said.
“He’s got a beautiful top on him, a beautiful muscle pattern and he stands just right and holds his head up.
“I look forward to seeing how he goes on and what he can contribute to the industry.”

Lot 40, Kymarney Nixon R045, was awarded reserve champion junior bull.
The October 2020-drop bull was presented by Scott Lewington, Kymarney Herefords, Gindalea, Uranquinty, NSW.
“The bull I picked out for reserve was probably not quite as powerful as the first bull, but a bull with lots of length and lots of top on him and really well blended up
through his shoulders,” Mr Reid said.

Gippsland stud Mawarra Genetics returned to the winning podium at Wodonga on Wednesday after claiming the intermediate champion bull title during the 57 th national show.

Peter Sykes said he was very proud of his family and association with Herefords Australia, adding to his long list of blue ribbons and major gongs at the annual
Hereford event in northern Victoria.
“It’s been a great day for our family and especially our son and daughter-in-law,” Peter said.
“This bull offers the whole package; he has tremendous muscle, and for a bull who has that much muscle he can parade out there and he’s backed up with a very pleasing EBV spread.
“He has a massive EMA, he’s got IMF as well and has moderate birth figures and great growth.”
Herefords Australia judge Steve Reid, Talbalba Herefords, Millmerran, said it was one of the best line ups of bulls he had inspected in recent times.
I’ve gone for a bull who I think is a real changer and a bit different to the bulls we’ve seen,” he said.
“He is quite extreme in his muscle and he has a wonderful EBV set for a bull that’s built like that because he has moderate birth weight, positive calving ease and he still has marbling.
“He gives our industry a lot that we can actually take forward in our cattle in one jump and I thought that’s what made him the champion here today.”