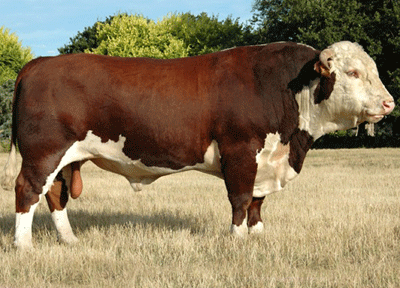 Sentimental was purchased by South Boorook Hereford Stud for $24,000 at the Hereford National 2007. His first nine sons at South Boorook sold to the Sale top of $22,000 and recorded an average of $7,333 in 2010. Sentimental is a Trait Leader for 200D, 400D & 600D, he is breeding with the consistency of type, carcase and growth for age that we see in his full brother, Mawarra Nostalgia.

Sentimental’s calves at Mawarra have certainly displayed these attributes. He was represented by two sons in our team for the Hereford National in 2010 $16,000 Van Dieman & $15,000 Victorious.  Another Sentimental son, exhibited at the National by Jacinta Pretty, Jacandra H S was awarded Reserve Senior Champion and sold for $13,000. Sentimental’s seven sons at Mawarra have averaged $7,650. Sentimental has calves registered to ten herds in Australia and his semen has been exported to Ireland where he is being widely used. We recently exported embryo’s to Uruguay and New Zealand sired by Sentimental.

We are very proud to have been invited to represent Australia at the 17th World Hereford Conference International Show & Sale in Uruguay, 18 – 25 April 2016. A Sentimental daughter, along with two Vice Admiral daughters, have been selected for the ‘Pen of three Heifers’. A Sentimental son will be sold and another shown as part of the international spectacular.