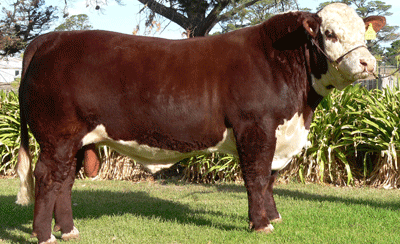 Storm C093 has been used widely throughout Australia, his Sire has consistently bred commercially orientated cattle displaying tremendous carcase attributes. Dam, Bowmont Maritana W168, is one of the best females in the Bowmont Herd. Storm C093 was represented in our Hereford National Team 2012 by You’re the One, his four sons sold to date at Mawarra have sold to $16,000 at an average of $9,750. Another son, After Shock, has been retained as Sire. He was represented in our 2013 Herford National Team by M. Aladin.