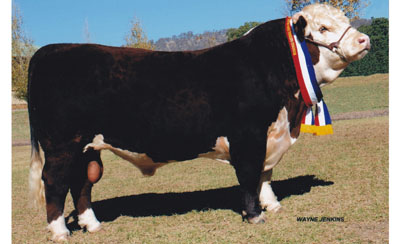 Trail Blazer was described as “…a wonderful bull of any breed.” by judge Alastair Day, Allendale Poll H S, after he decorated him with the Grand Champion Sash at the Hereford National Show & Sale in 2008. Purchased for $48,000 by Glenwarrah H S and Wandoo Wandong Herefords, this young sire attracted much attention. His dappled coat covers a heavily muscled hind quarter; at 26 months he weighed in at 1106kgs with a raw EMA of 136sq.cms. and scanned only 13/9 fat depth. He is a Trait Leader for 200D, 400D & IMF. Minerva 554 has an enviable record; 10 sons averaging $17,100 including two Hereford National Grand Champions and Sires, Vice Admiral & Vice Chancellor.